The store will not work correctly in the case when cookies are disabled.
Menu
Account
TOP PRODUCTS
SciQuip 3 Peak's Challenge 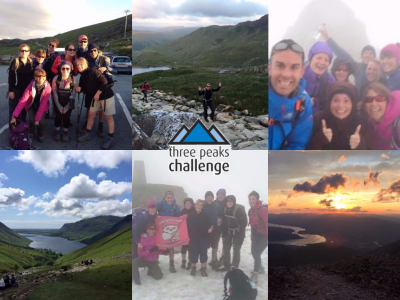 Leaving Newtown at 10:00 on Friday, 3rd July we arrived in Fort William at 19:30. After some final checks we began our first climb to the top of Ben Nevis in brilliant sunshine and temperatures of 24oC. The team reached the top in under 3 hrs, where the temperature had dropped considerably and we were now standing in 3ft of snow, being buffeted by strong winds! We completed Ben Nevis in 4hrs 48mins coming down to some spectacular views of the Scottish Highlands.
All aboard the minibus once more and on to Scafell Pike in the Lake District, again with beautiful sunshine at the bottom and thick cloud at the top we got up and down in under 4hrs and so finally on to Snowdon, Wales. Some people found the final climb of Snowdon tough after a lack of sleep and 2 mountains already under their belts but our fantastic team spirit kept everyone going and all nine members of the team completed the 24hr challenge in 23hrs 43mins 43 secs. We should also mention our driver, Sarah Evans who did an excellent job covering almost 1,000 miles in 24hrs.
So far the team has raised £3000+ from sponsorship with all the proceeds going to the Creative Studio build for Newtown Primary School.
It is an amazing achievement in itself for all members of a team to finish the challenge let alone for all to do so within the 24hr time limit. Therefore, I would personally like to thank all of those who joined me in the challenge for their fantastic spirit throughout and brilliant fund raising efforts, well done.
The team:
Matt Brooksbank, Deb Brooksbank, Donna Reynolds, Jayne Camber, Fiona MacLiam, Cayley Lay, Amanda Teece, Martin Teece, Katie Ellis & Sarah Evans

BACK
Get in touch with us on 01939 234222
Need further assistance or can't find what you're looking for? Please complete all details of your enquiry and we will get back to you shortly.